I’m sure at some stage we have all dropped a powder and found it smashed to pieces when we go to pick it up. I know I have, many a time! I’m an incredibly clumsy person, I regularly trip up over my own feet or pick something up for it to fall straight out of my hands. Most of the time I end up with a stubbed toe or a bruise, I get over it and move on. What I find hard to move on from is when I realise that my clumsiness has led to a heap of smashed makeup on the floor.

I was amazed when I was scrolling through Pinterest to see hundreds of Pins with people claiming to have a way to fix smashed powder makeup that actually works. I saved a few Pins but never thought too much of it to be honest. That was until I broke my absolute favourite highlighter, my Becca x Jaclyn Hill Shimmering Skin Perfecter (Champagne Pop). To say I was devastated is an understatement. My only consolation was that the lid was closed so I didn’t lose any product. However I begun reading the Pins I had saved on how to fix the broken powder.

I decided I’d take a chance in trying to use Pinterest’s advice to fix my powders. Instead of going straight in and testing this out on my Becca highlighter I decided to try it with some relatively less expensive makeup first. I had a MAC eyeshadow, MAC blush and Glossybox eyeshadow that were all broken as well (I really am clumsy), so I chose the MAC and Glossybox eyeshadows as my testers. They are both a lot less expensive than my highlighter and a lot easier to replace if I screwed up.

Theres a few things I needed to get before I could start: 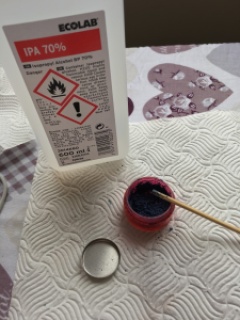 I started off by completely crushing the eyeshadow in a small pot, then the next step was the most nerve-wracking. This is when I needed to add the alcohol, its all or nothing after this. I added in the alcohol little by little whilst mixing it into the powder to form a paste. 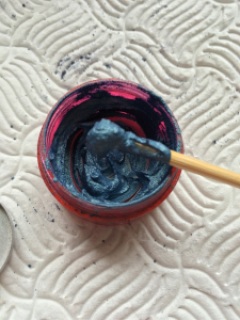 Once I had the eyeshadow completely blended, I transferred the paste into the original pot and smooth it out. This is the part where Pinterest lies. It is not easy as it looks to get a smooth, flat top on your powder. In a lot of the pictures I seen, clingfilm was placed over the top of the powder so you could smooth it out with your finger and get a perfect flat finish. This did not work for me, yes it did make it nice and smooth but it also defeated the purpose of the exercise. You need the alcohol to evaporate for the powder to set. By having a piece of plastic sealing it, the alcohol cannot evaporate fully.
I used the edge of a skewer to flatten the eyeshadows as much as I could and left them to dry out on a windowsill.

I left my eyeshadows to dry out completely overnight and checked on them the next morning. I was delighted to find them completely set. The alcohol had completely evaporated off leaving no smell behind. When I swatched the shadows the pigmentation was the same as it had been before they ended up in pieces!
As I had tested out the procedure I decided to bite the bullet and try to fix my MAC blush and my Becca highlighter. I used all the same steps as above.

As you can see from the picture above my eyeshadows and highlighter turned out perfect! The blush on the other hand, not so good. I don’t know why but the alcohol evaporating from it caused it to crack and break again. I tried redoing the whole process with it but it cracked even worse the second time. Being honest I’m just going to throw it out, it has been broken for so long that I don’t use it anyway. I’d have to lose every other blush I own before I would reach for a broken one as they’re more of a hassle to use and I can’t deal with the mess everywhere.
Overall I think I would count this little trial a success, I was able to fix most of my smashed makeup. I was glad I could try it out so in future if I break something, it is inevitable that I will, I know there’s a chance of me being able to reverse time so to speak!
If any of you are trying this out I would recommend you practice first on an inexpensive powder like I did so you have a better idea of what your doing.
If you’ve tried this out I’d love to hear how it worked out for you! If your thinking of trying this and have any questions be sure to get in touch with me by leaving a comment below, emailing or messaging me on social media!
– Megan x 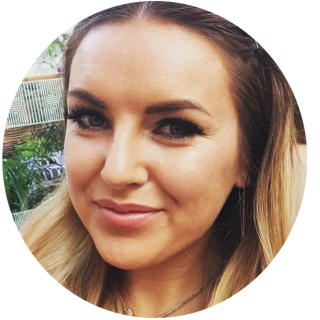